First Installment: “Conversations With and About Mike,” Starting with Governor Brown 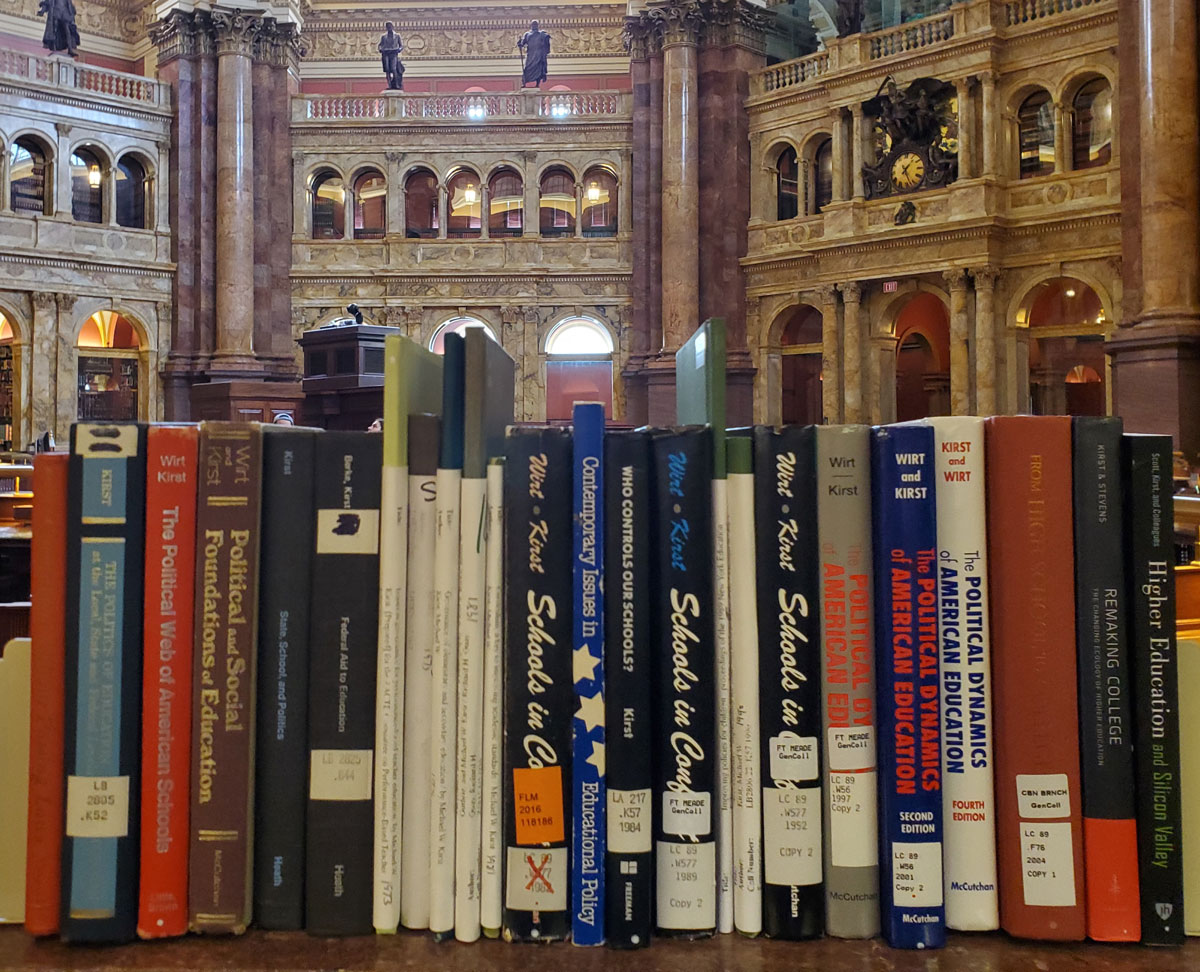 Dr. Michael Kirst’s Book Collection in the Library of Congress: Half a Century of Published Writings,
Anchoring the Politics of Education Field. Photo Dick Jung

“If only the rest of us could begin our work by building on what Mike has already learned ” Thomas Hatch, Co-Director of the National Center for Restructuring Education, Schools, and Teaching, wished out-loud  in a recent piece about Mike Kirst for his fellow policy researchers, Thomas Hatch on Mike Kirst

I’ve started this Mike Kirst Biography Multi-Media Project precisely for that purpose–not only for education policy researchers–but for all who work in or care about America’s public schools.

In the past half-decade, Mike along with his many colleagues may have done more to advance the education and life chances of, especially, the most disadvantaged children in this country. Yet, while recognized in certain academic and policy circles, Mike is generally unknown to those most actively engaged in American education in the trenches of the nation’s classrooms and local boardrooms, including teachers, principals, school district leaders, and even many education policymakers.

On top of all that he is a humble, beer-loving, fascinating, approachable, inquisitive, and plain-spoken (generally) guy ….very much worth hearing from and about.

I’m going to start with a handful of recorded insights about Mike from an interview I had with Jerry Brown during his last Friday day in office on January 4, 2019.

In that interview, then Governor Brown reflected on his more than 40 years with Mike as his primary education expert, confidante, and longest-serving President of California’s State Board of Education–a state that educates nearly one in eight of American school-aged children.1 His influence though, especially in state education policy, is decidedly national in scope.

Let’s start by listening to Brown’s answer to my last question in that interview:

In an unusually succinct commentary, Governor Brown emphasizes from the beginning of their relationship that Mike had the uncanny and rare ability to traverse the worlds of both academia and policy/politics.

More about the governor’s reply to this question and several other insights about Mike (and related matters) in my next installment in a few weeks.