We start this fourth installment of “Conversations With and About Mike” with him reflecting on his 50+ year career. Let’s watch and listen:

EdSource, California’s premier source for California and national education news, produced this short video clip when granting Mike its first Education Pioneer Award in 2017. Did you find yourself chuckling with Mike at the end of the video clip?

In it, Mike gives us a roadmap for much of the content and trajectory of his career as well as direct evidence of his character and charm.

The multimedia platform of “Conversation With and About Mike” sets this biography project apart in significant ways from other coverage of education reform efforts in America.

Marshall McLuhan coined the phrase “The medium is the message” in his 1964 best-seller Understanding Media: The Extensions of Man. McLuhan explains, “Each medium, independent of the content it mediates, has its own intrinsic effects which are its unique message.” McLuhan uses the term “message” to signify both the content of the words and the character of the speaker or writer. 1

So, for example, the manner in which EdSource spliced together various parts of its interview with Mike in making this video conveys meaning beyond the content of Mike’s words.

In seeing and hearing Mike’s chuckle, we actually experience his character…and at the same time steal a glimpse into part of his success as a policymaker.

The multimodality of these “Conversations With and About Mike” also offers a special opportunity to broaden the audiences about these reform efforts to include those most affected by often well-intended policymakers but almost as often with unintended consequences once the policy makes its way into schools and classrooms. These curated media clips are then especially helpful for a biographer to capture the forces affecting American education for policymakers and classroom teachers alike.

Eighteen months after awarding Mike EdSource’s first Pioneer Award, Executive Director Louis Freedberg and Editor-At-Large John Fensterwald reflected in a January 2019 podcast on the monumental K-12 school reforms that had been put in place during Brown’s final two terms as governor.3 Let’s listen to some excerpts from that podcast with Louis Freedberg speaking first:

Mike’s legacy: “The Local Control Funding Formula…at the top of the list”

And then in this next  pair of clips, Louis Freedberg and John Fensterwald comment on two important aspects of Mike’s character and relationships:

Mike’s “intuitive sense” especially as a “duo” with Jerry Brown

We end this installment hearing from Mike himself again, this time elaborating on the “patience and persistence” approach that Fensterwald extols as undergirding Mike’s effectiveness as a policymaker. 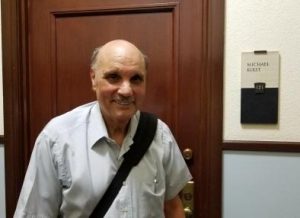 These first four installments of “Conversations With and About Mike” form the corner-posts for the upcoming series of installments for this component of the Mike Kirst Biography Project.

We will hear Mike, scores of policy leaders, and some family members talk about his early years  growing up in Reading, Pennsylvania; education at Dartmouth and Harvard; roles in President Johnson’s administration in the 1960s; and, continuing his prolific national and international education finance and policy work since moving into Room 141 in Stanford University’s Cubberley Hall in 1969. A half-a-century later, you can still find Mike occasionally in that office, now working more behind the scene, and still very much out-and-about continuing to advance in his words “continuous improvements” to the historic set of reforms he’s helped put in place with scores of others.

Hope you’ve enjoyed the initial framing installments.  Let me know what you think. And, stay tuned!

2 Proposition 13 was an amendment to the California Constitution passed by voter initiative in June 1978 that limited property taxes, until then the major source of school funding. As explained further in an EdSource glossary: “Until 1978 property taxes furnished about two-thirds of [K-12 California] education’s revenues. Proposition 13 caused a nearly exact flip-flop when the Legislature bailed out school districts with state funds. The governor and Legislature also took over the allocation of local property taxes to schools, cities, counties, and special districts.”

3 Click here for the full Episode 89 podcast: Mike Kirst reflects on his years on the State Board of Education and here for EdSource’s condensed transcript of John Fensterwald’s interview with Mike in that podcast.