We turn again to Governor Brown’s reflections during his last Friday in office. After working side-by-side with Mike for four-and-a-half decades, he offers additional insights about their time together, their relationship, and some of their most notable challenges and accomplishments.

It seems as though I caught Brown at a reflective moment as he and his staff were packing up from his second 8-year tenure as Governor during which many believe some of the most important education reform legislation in California’s history was enacted.1

Brown elaborates on his observation, “I probably talk to Mike more than anybody else” when it comes to reforming K-12 education policy. Let’s hear why, in Brown’s own words:

Several of the key traits the Governor mentions—Mike’s expansive knowledge base, low-key geniality, keen political instincts, and expansive network of collaborators —were often cited by the nearly 50 leading policymakers and researchers interviewed for this biography project.

Governor Brown adds his own flavor to this mix, noting that Mike “helped [him] stay in touch with the currents that circulate through the world of education” and that Mike served him well as a “good interlocutor.”

In later installments, we’ll hear Mike talk about how important having and using this Socratic rhetorical skill, drilled into Brown during his Jesuit seminarian training, was to win his confidence and communicate effectively with him over the years.

Before moving onto another leitmotif about Mike’s modus operandi, it’s informative to pause and elaborate a little more about the Governor’s side comment that “education [is] one of the biggest items in the California budget.”

California educates nearly six million students in grades kindergarten through twelve; that’s one out 0f every eight public school students in the United States.2 These students attend more than 10,000 schools in an interlocking system of 58 county offices of education, 977 local school districts, and more than 1,200 charter schools.3

In the most recent years in California, the bulk of state support for K-12 education and community colleges in California has come through Proposition 98. The K-12 portion alone of Proposition 98 funding total $58.3 billion for 2019-2020 and accounts for nearly 40% of the state’s entire budget of $147.8 billion.4

Let’s listen to another of Governor Brown’s observations about Mike’s service to him and California education. Note the key distinction the Governor draws between “advocacy” and “inquiry.” Let’s listen in:

That the Governor could count on Mike to give him “balance,” “structure,” a “data perspective” based on “inquiry” more than “advocacy” developed over time to be at the core of the Brown-Kirst partnership, or as Brown called it several times in this interview, a “fruitful collaboration.”

The key point to note in this “advocacy vs. inquiry” clip is Brown revealing his belief that “you need a very strong measure of inquiry to take account of life and its many complexities. Clearly, the governor feels that “Michael’s been a good partner in that endeavor.”(emphasis added)

When I asked the governor about one of their signature pieces of reform, the Local Control Funding Formula (LCFF) which we’ll explore more in later installments, he referred me to a key philosophic tenet of twentieth-century philosopher and activist Martin Buber that “All real living is meeting.” Let’s listen in:

In this clip, Brown  expresses passionately, almost viscerally, his thoughts about teachers, students, and the complexities and profound nature of teaching which he feels cannot be captured in test scores and other “metrics” often advocated by “government [policy makers]” and “distant academics.”

You can hear the animation in this voice as he begins:

“All life is meeting. Well, you don’t meet a metric. You meet a child. You meet a parent. You meet a fellow teacher. And in that meeting there is dialogue and there is exchange.

State government, federal government, distant academics want to get in the game. They don’t want to get in the classroom. They can’t. There are too many classrooms. And they are not satisfied to have teachers teach. They want to minutely prescribe in some way. That’s been one of the tensions. So, Mike came up with this weighted school formula which became the Local Control Funding Formula.” 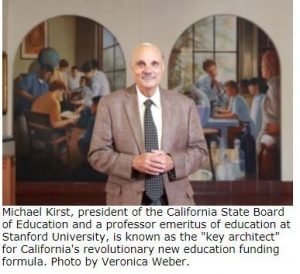 The next several installments of “Conversations With and About Mike” will treat in fuller detail California’s Local Control Funding Formula–in some new and important ways explicating its “genesis and genius.”