We began in Installment One and Installment Two of “Conversations With and About Mike” laying out several themes about Mike Kirst’s half-century of efforts to help improve American education, each of which will be further explored throughout this biography project.

We start this third installment by listening to Jerry Brown again, in his final days as governor now responding to one of my last questions in that interview: “Is there anything you and Mike have done [in your recent education reform policy] that you would like to see being done in any other states?”

“The Teacher as ‘Quarterback’: Counter to Trend of Increasing Centralization”

As you can hear, Brown is still feisty even as the books are coming off the shelves of his office, when noting that “the devolvement of more authority to the local level” is what he hopes other states adopt.

Brown may sound as if he’s bragging a bit in these final days as governor when he concludes his reply to my question by boasting: “California is going counter to the trend of increasing centralization of education.”

But perhaps not. Here is how the Learning Policy Institute, led by Linda Darling-Hammond—now California’s current State Board of Education president— describes this set of reforms:

“[A] sweeping policy that both created a more equitable method for funding schools and overhauled the state’s accountability system. Virtually overnight, California’s highly centralized system shifted to one in which districts, in partnership with their communities and staff, have broad discretion over how they spend their resources. The state’s ‘test and punish’ framework—… was replaced with one that seeks to ‘assess and improve’ through data analysis and capacity building. While still working to realize its grand vision, California has laid a strong foundation rooted in equity and committed to a holistic approach to meeting students’ academic and social-emotional needs.”1

At the core of this reform is the adoption of a new curriculum framework based on the Common Core and newer standards, most notably for computer science, as well as an assessment approach aligned with these standards. On the funding side, The Local Control Funding Formula since 2013 has provided higher overall support to all California districts as well as additional funding for K-12 education weighted for students’ needs while also handing over much of the  authority in how to spend these funds to local school officials and teachers. 2 More specifically, the weighted formula provides districts additional funding based on the number of low-income students, English learners, foster children and homeless youth. It also requires districts to draw up a Local Control and Accountability Plan.

But it’s now time to hear from Mike in these “Conversations With and About Mike.”

We begin with a set of short audio clips from an invited presentation Mike gave on a rainy New York City day in April 2018—upon receiving the American Education Research Association’s Career Public Service Award. Mike titled this overview of his professional journey “Public Policy Impact of Education Research: A 54-Year Career Perspective.” 3 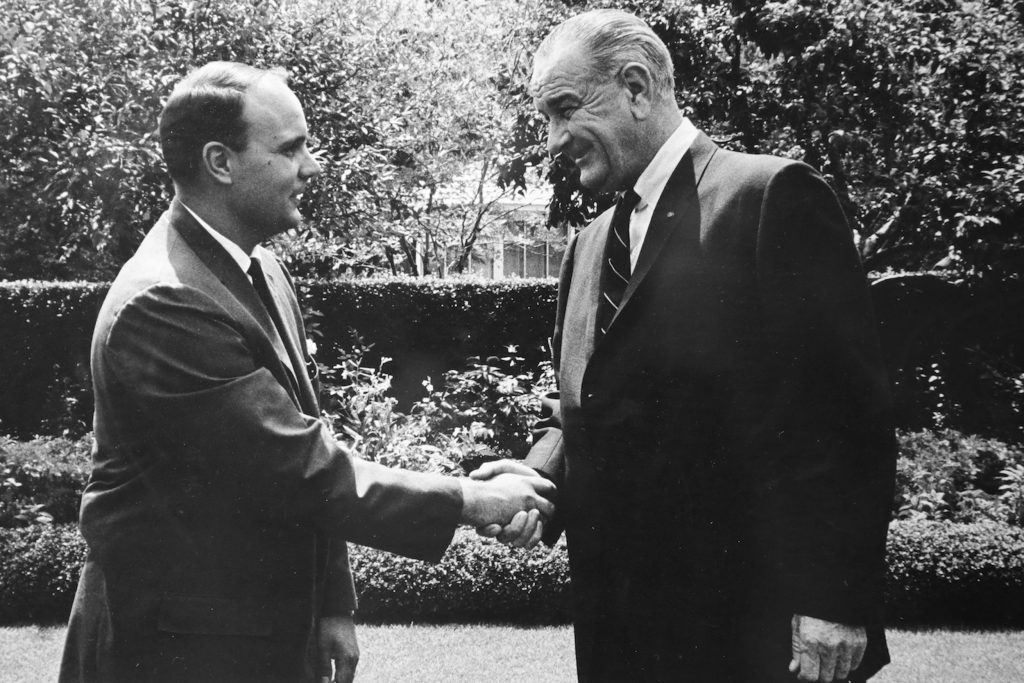 Mike shaking hands with President Johnson in the 1960s. Photo courtesy of EdSource

Let’s hear below first how Mike summarized his professional life before coming to California:

“I began my career in Washington…”

We’ll hear in a subsequent installment why Mike calls the start of his years at Stanford University his “Accidental Professor” era. Now though let’s listen to how Mike’s portrayed his 40+ years as Jerry Brown’s chief education consultant and confidant.

The four-decade span Mike noted in these opening remarks makes Brown both the youngest and the oldest governor for California and Kirst the longest-serving president of the State Board of Education (SBE) in the country’s most populous state.

Mike’s depiction of the long-term relationship as starting with “Serrano” refers to Serrano v. Priest California Supreme Court decisions which involved three cases having to do with the financing of public schools. Serrano struck down California’s public-school, general-fund financing structure as a violation of equal protection because under this system per-pupil expenditures varied greatly and depended on a school district’s tax base. The California State Legislature’s response to Serrano was significantly constrained however by the passage of Proposition 13 in 1978, which reduced property-tax revenues and imposed a 2/3 majority vote requirement for statewide tax increases. The initial property-tax-based solution was replaced by a funding scheme that relied much more heavily on state-, as opposed to district-revenue. 4

At the time, Mike was one of a few highly recognized experts in school finance and politics. So this school-funding decision played to his strong suit. This set of decisions along with Proposition 13 and broader economic and political factors, however, forced Brown and Kirst into a reactive, rather than proactive, mode during Governor Brown’s first two terms of office (1975—82).

Also as important, or perhaps more so, in this autobiographical pithy portrayal of the Brown-Kirst policy partnership, is that Mike was also Brown’s education policy adviser during his tenure as Mayor of Oakland from 1999 to 2007.  The mention that Mike makes of the “Oakland era” of collaboration is actually an infrequently recognized turning point for both  the move from an emphasis on top-down, prescriptive state finance and policy to what Mike characterizes as  “a more humble approach.”

Even as you listen to this next trio of short clips from Mike for this AERA symposium, think you’ll begin to hear and note the human qualities that separate Mike from other academics and undergirds his effectiveness as an education policy reformer.

“I participated in building this monster…”

Mike’s self-effacing humor is quite evident in this next clip as well, and perhaps even more in the final one for this installment. We’ll hear much more in subsequent installments about Mike’s role in the start-up of the Title I program while in Washington during the mid- and late- 1960s in several interviews I’ve conducted with him and others there at the time. We’ll also hear and see how in his later years as president of California’s State Board of Education, he and Brown challenged some of the U.S. Department of Education’s top officials and policies as he and the State Board of Education worked to help make teacher’s in Brown’s words, more like “a quarterback” in the state’s K—12 classrooms.

“The state had 41 categorical programs…”

Mike very much enjoys telling this story about Governor Schwarzenegger and Alice Waters at her famous restaurant to characterize the K—12 educational policy quagmire that he and Governor Brown inherited in 2010, especially related to the proliferation of categorical programs. 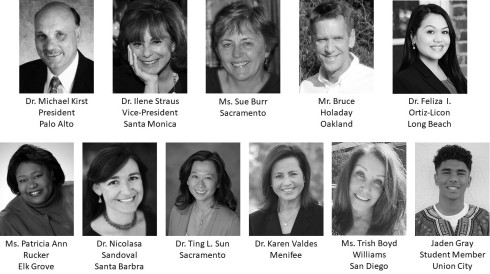 Education Reform as a Team Sport. Photo courtesy of California State Board of Education.

When asked in recent times to define what explains the success in California’s education arena, Kirst frequently responds with the phrase: “patience, persistence, humility and continuous improvement.” Interviews with scores of others underscore that this is more than just a catchy phrase for Mike. It truly defines who he is at his core, how he works, and why the policies he has devised with so many may be among the most important for school-aged children in the past half-century.

In the next several installments of “Conversations With and About Mike,” we’ll learn much more from Mike from my and other “conversations” with him.

Also we’ll hear more about Mike’s background, important professional and personal traits, and leadership style from several of Mike’s colleagues on California’s State Board of Education and several others earlier in his career–including respected academics, policymakers and influencers (with views similar and different from his) as well as some family members.

Of course, we’ll also report on what recent and ongoing research has determined to be successful and lacking in especially these most recent reforms.